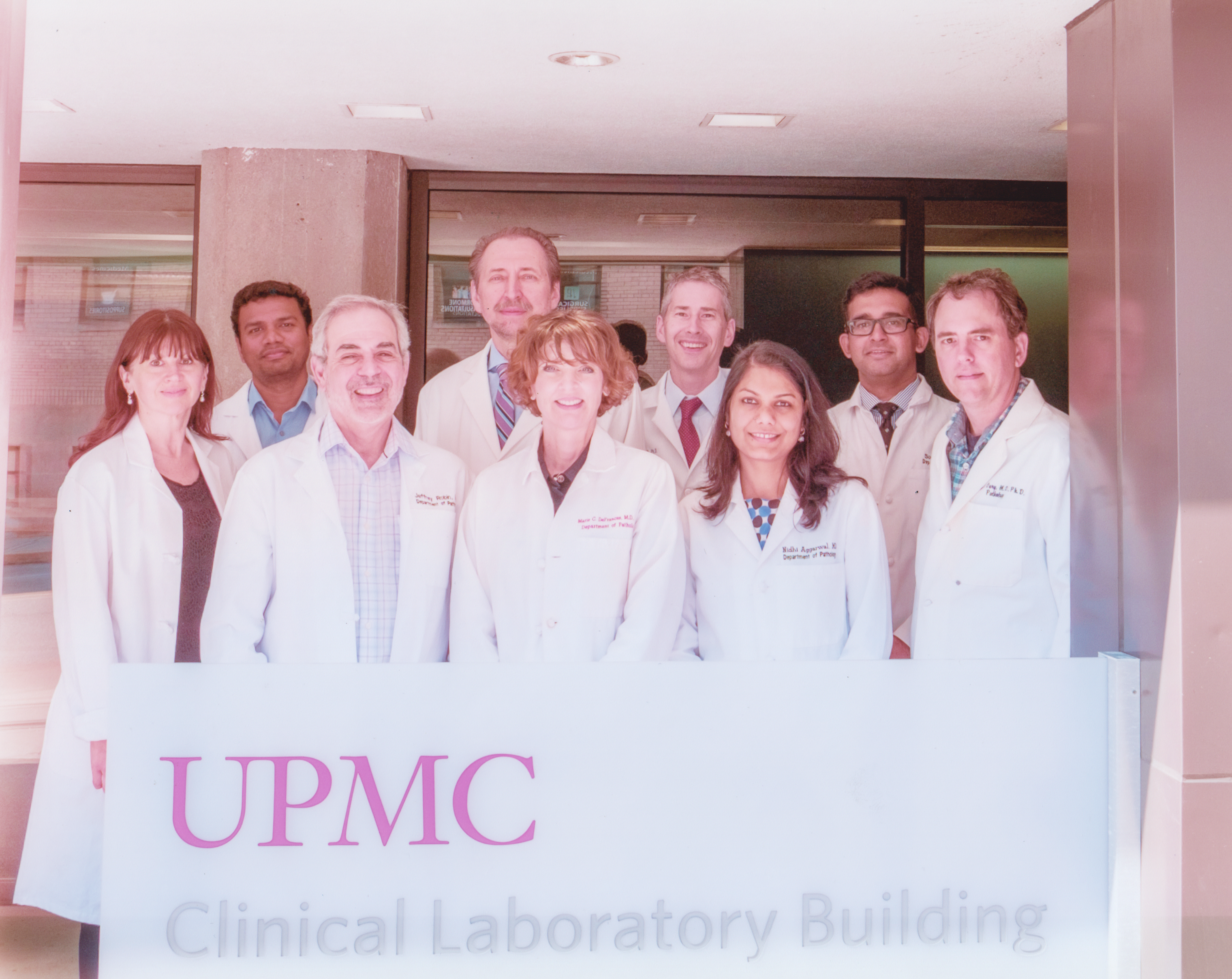 The Division of Molecular & Genomic Pathology (MGP) and MGP laboratory combine more than two decades of academic experience and leadership in molecular diagnostics to deliver the most advanced genetic and genomic testing. The division's clinical focus is on performing and interpreting complex genetic tests in the areas of solid tumors, hematologic malignancies, and genetics.

The Molecular & Genomic Pathology Laboratory is accredited by the College of American Pathologists (CAP) and CLIA and currently conducts more than 30,000 tests annually. MGP has a demonstrated commitment to developing and offering state of the art diagnostic and prognostic molecular and genomic assays in the fields of inherited diseases, hematological malignancies, and solid tumors. They utilize cutting edge molecular testing platforms and informatics approaches exemplified by next-generation sequencing.

Yuri Nikiforov received his M.D. with Honor from Minsk State Medical Institute in Belarus in 1985 and Ph.D. in Experimental Pathology from the same institution in 1991. He completed an internship in Pathology and served as Assistant Professor at the Department of Pathology at Minsk State Medical Institute until he moved to the U.S. in 1993. He completed his postdoctoral research fellowships in thyroid pathology with Dr. Douglas Gnepp at Rhode Island Hospital/Brown University (1993-1994) and in thyroid cancer genetics with Dr. James Fagin at the Division of Endocrinology, Cedars-Sinai Medical Center/UCLA School of Medicine (1994-1995) and Division of Endocrinology and Metabolism, University of Cincinnati (1995-1997). After completing residency in Anatomic Pathology at the University of Cincinnati in 2000, he joined the Department of Pathology as Assistant Professor and then Associate Professor of Pathology. In August of 2006, Dr. Nikiforov became Director of the Molecular Anatomic Pathology Division at the University of Pittsburgh Medical Center and, in 2013 was promoted to the Vice-Chair for Molecular Pathology and Director of the newly formed Division of Molecular & Genomic Pathology.

Dr. Nikiforov’s clinical expertise is in thyroid tumors' pathology and genetics and molecular diagnostics of thyroid and other diseases. He serves as the co-director of the Multidisciplinary Thyroid Center at UPMC and as a national and international consultant on thyroid pathology. He is a senior editor of the textbook “Diagnostic Pathology and Molecular Genetics of the Thyroid,” now in its 3rd edition. Aiming to decrease a large number of diagnostic thyroid surgeries performed for nodules with unclear cancer risk, he collaborated with Dr. Marina Nikiforova to invent a molecular test for thyroid nodules, the earliest version of which was launched clinically at UPMC in 2007.  Now known as a ThyroSeq Genomic Classifier v.3, it is widely used in the U.S. and other countries. In 2014, Dr. Nikiforov formed and led an international group of pathologists and clinicians to reexamine a common type of low-grade thyroid cancer known as “Encapsulated Follicular Variant of Papillary Carcinoma.” Based on the generated data, the group proposed in 2016 to reclassify this tumor as “Non-Invasive Follicular Thyroid Neoplasm with Papillary-Like Nuclear Features (NIFTP)”, removing the word "cancer" from the diagnosis. The new entity was accepted by the World Health Organization in 2017. The reclassification is expected to affect annually >50,000 patients worldwide; it has contributed to the decreasing incidence of thyroid cancer in many countries observed over the last several years. Dr. Nikiforov served on the American Thyroid Association Taskforces that published the Anaplastic Thyroid Cancer Guidelines in 2012 and 2021, and Management Guidelines for Adult Patients with Thyroid Nodules and Differentiated Thyroid Cancer in 2016.

(1) The discovery that genes involved in recurrent chromosomal rearrangements in cancer are localized in close 3D proximity to each other in the nuclei of normal cells at the time of exposure to radiation or other genotoxic stresses, providing the structural basis for non-random occurrence of carcinogenic gene fusions in human cancer (Nikiforova Science 2000).

The figure below illustrates that two genes, RET (red) and CCDC6 (green), often forming an oncogenic fusion in thyroid cancer, are located in close spatial proximity in the nuclei of normal thyroid cells, predisposing to the RET-CCDC6 fusion as a result of incorrect repair of double-strand DNA breaks induced in these genes by radiation or other genotoxic exposures.

(2) The discovery of a novel mechanism of BRAF oncogene activation via chromosomal rearrangement leading to the loss of the autoinhibitory N-terminal portion of BRAF and demonstration that in thyroid cancer, chromosomal rearrangements leading to oncogenic gene fusions are the main mechanism of tumorigenesis associated with radiation exposure, in contrast to the same oncogene activation via point mutations in sporadic thyroid cancer (Ciampi J Clin Invest 2005). Later, Dr. Nikiforov and collaborators provided the first demonstration that gene fusions in thyroid cancer developed after the Chernobyl accident have direct with radiation dose received by thyroid (Efanov J Natl Cancer Inst 2018).

(3) The discovery of a common transcription-related and ATM kinase-dependent mechanism that rapidly induces contact between homologous chromosomes at the sites of double-strand DNA  break (DSB) in human somatic G0/G1 cells,  which may enable DSB repair by homologous recombination utilizing the homologous chromosome as a repair template (Gandhi PNAS 2012)

(4) The discovery of a novel type of gene fusions in thyroid tumors involving the THADA gene on chromosome 2 fused to multiple sites in the region upstream of the IGF2BP3 gene on chromosome 7, and dissecting the mechanism of tumorigenesis which does not involve the formation of a chimeric protein, but rather relies on overexpression of the full-length IGF2BP3 mRNA and protein and increased IGF1 receptor (IGF1R) signaling (Panebianco PNAS 2017).

The figure below illustrates how IGF2BP3 activation via gene fusion and other alterations increases IGF2 translation and IGF1R signaling via PI3K and MAPK cascades, promoting cell transformation and that growth of IGF2BP3-driven tumors may be blocked by IGF1R inhibition, suggesting that IGF2BP3 overexpression in cancer cells may predict sensitivity to anti-IGF1R drugs. 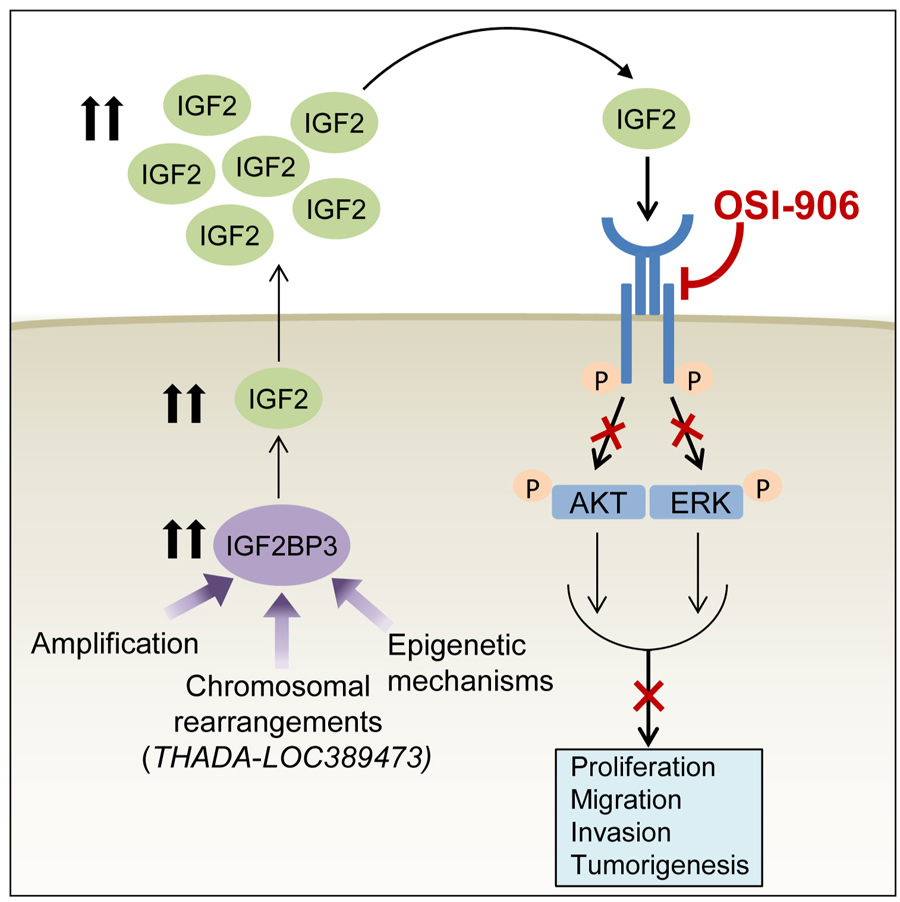 (5) The discovery of the genetic mechanism of hyalinizing trabecular tumors of the thyroid. This tumor, described in 1987 as benign hyalinizing trabecular adenoma, was later reclassified as hyalinizing trabecular tumor and suspected to be a variant of papillary thyroid carcinoma (PTC) based on some reports suggesting that it harbored RET fusions, a hallmark of PTC. In 2019, Dr. Nikiforov’s group reported the discovery of PAX8-GLIS3 and PAX8-GLIS1 fusions in these tumors, which are responsible for prominent hyalinization, the most distinct morphologic features of these tumors, and conclusively distinguish them from PTC (Nikiforova Thyroid 2019).

The figure below illustrates the two types of GLIS fusion discovered in hyalinizing trabecular tumors and upregulation of collagens and other extracellular matrix genes in these tumors with deposition of collagen leading to prominent hyalinization.

(6) The description of a new disease entity, “DICER1-positive poorly differentiated thyroid carcinoma of childhood and adolescence”. In collaboration with colleagues, Dr. Nikiforov’s group uncovered genetic mechanisms of poorly differentiated thyroid carcinomas occurring in young patients, reporting that most of these tumors are driven by DICER1 mutations and they may occur as a manifestation of DICER1 syndrome (Chernock Mod Pathol 2020).

The figure below illustrates the morphology of poorly differentiated carcinoma in children and adolescence (left panel) and detection of DICER1 mutations by Sanger sequencing (right panel).